The Māori language (te reo) is an official language in New Zealand. Before you panic, we all speak English. Phew, huh? Hold on a sec, there's more. The problem for a visitor is that Māori words feature quite prominently throughout New Zealand. No need to worry though because this page will help you out with pronounciation. 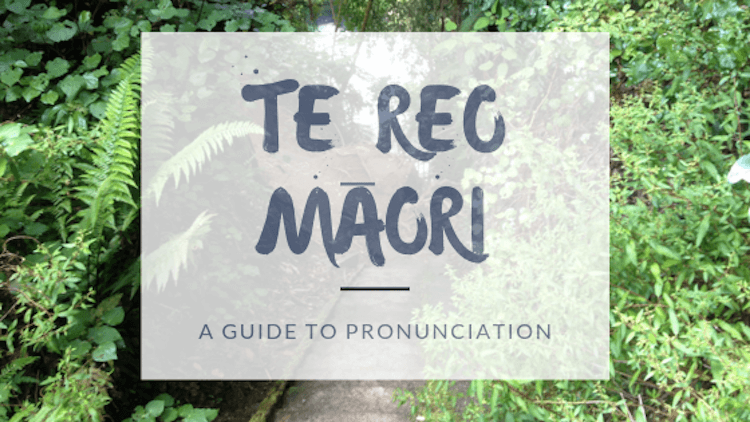 You are likely to be greeted in Māori. A lot of streets have Māori names, as do lakes, rivers, mountains, cities, attractions, and on and on. Quite simply, you're going to come across the language everywhere. You might want to ask for directions, order from a menu (native food), visit a native village, the list goes on, so it's likely you'll use some Māori words.

So what does that mean for you? The biggest issue is that the words aren't pronounced as they appear.

Making an effort to learn basic pronunciation, and words, will make communication and your visit much easier. I've spoken with visitors myself and it can take a lot of guesswork and sign language to decipher a street or place name the person is trying to say.

You will find that local people will love that you are trying and do their best to help - on the spot lessons. :)

Even We Struggle with Pronunciation At Times

A lot of Europeans -including local ones - have trouble getting their tongues around the language, as do a lot of Māori.

I didn't have much to do with the culture and language growing up due to the fact my Māori father was from up North - meaning his tribal affiliations were there rather than Rotorua which is where I was born and grew up.

When he was growing up in the 1930s he was punished for speaking the language in school. True! I don't know whether European teachers were trying to wipe out the heathen ways of the indigenous culture or what.

It seems to have been nationwide because as a consequence it's like a whole generation shut down around the language. To cut a long story short, Dad didn't speak the language with my brothers and I so we missed out learning our native tongue.

While training to become a guide at the Rotorua Museum, I found out just how well I didn't pronounce the words properly. Many of the guides had trouble with pronunciation as well so it was back to the classroom for all of us. Believe me, I know how hard it can be to get your tongue around the words.

A Fun Way to Learn Pronunciation

The two videos below will help with pronunciation.

New Zealand's How to Dad began making YouTube videos about about being a Dad which went viral, and now he's branched out to become a New Zealand Ambassador (I don't know if it's for real or not) on different things about New Zealand. He's super silly but the video does the trick.

The second video is a vowel song set to the music of "Stupid Cupid". It starts off at a slower pace then repeats picking up speed. I mentioned to my daughter that I was going to put the video on this page and she began singing it right away which surprised the heck out of me. She'd learnt it in school over 20yrs ago, but still remembered it. And that's the point, repetition. :)

I bet you won't be able to get that song out of your head, and you'll be singing it in your sleep. Hate me if you like. :)

Now if videos aren't your thing, and the written word is, read on.

Vowels
You will see in the following table that there are two rows with the five vowels. The third row of vowels has a macron on top of the letters. This indicates a longer vowel length. The rows with the words below each vowel are how the vowels are pronounced.

Depending on the length or placement of the vowel, similarly spelt words will have different meanings. Here is an example; keke means cake and kēkē means armpit or loan and kekē means to creak. It would be funny getting them mixed up wouldn't it?

A lot of words have two vowels together: ai, au, ao, ui, ua, oa, ia, ea. Practise by separating initially eg. a i, a i, until you can run them together.


Consonants
Consonants are pronounced much the same as in English with a few differences.

r - is not rolled but is pronounced quite close to the 'l' in English. The tongue is in the same place as, for example, when you say 'lollies'. This is the one I have a problem with.

p - is usually softer than it is in English.

t - is pronounced more like a 'd' with the tip of the tongue slightly further back from the teeth.

wh - is used as a consonant. It is commonly pronounced as an 'f' although in some areas you may hear it said a bit differently such as the 'wh' in 'when'


Syllables
Break the words up into syllables and say them slowly at first, getting faster and faster as you get better.

A syllable in the Māori language is either a vowel on its own or a consonant followed by a vowel - and don't forget, 'wh' and 'ng' are counted as single consonants. Try these.

Find That Word or Phrase

If you want to make use of a Māori language dictionary you will find a particularly good one here at Te Aka Māori Dictionary website.

As a free resource it is a work in progress with a number of features:

Words To Practise Before You Come To NZ

Now that you have an idea about Māori language pronunciation go to my page of Māori Words. Here you will find words and phrases you are likely to come across on a visit to Rotorua and also throughout New Zealand. It will open in a new window so you can still refer to this page as a guide to the pronunciation.